Just for the fun of it and
because we are often asked
the question; "What is the
difference between
Brusho, PaperArtsy Infusions
and Cosmic Shimmer Pixie Powders?"
I asked Claire Jackson to put
them to the test.  She did and here
is what she found........... 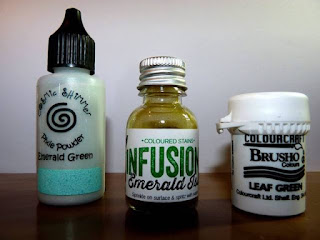 Having seen the fabulous samples Chris Dark
made for her June class I was tempted into
buying a few of the new Cosmic Shimmer
Pixie Powders.

When I get a new product I always like to
have a bit of a play to see how it’s
going to react. This time I thought it would
be a good idea to compare the Pixie Powders
with Brusho and PaperArtsy Infusions.

First of all there are differences in the packaging.

Brusho comes in a pot with a wide opening
which for most purposes doesn’t give the
control you need to sprinkle the powder,
hence most people tend to pierce the top with
holes like a pepper pot. It is handy though
if you want to use larger amounts to make
your own sprays. The pots don’t have any
colour on so it’s also much harder to see
which is which.

Infusions come in a smaller bottle but
it’s still useful to pierce holes in the top
for sprinkling. They do have coloured labels
so it’s much easier to see which is which.

Pixie Powders also have coloured labels
and a top with a (removable) fine nozzle
but I did find the top clogged a couple
of times and I had to use a pin.

Brusho is made of ink crystals.
Some of the colours are one pure hue,
while others are made of different coloured
crystals combined.
The colours can be very intense and bright.

Infusions are made from a combination
of dye crystals with added walnut crystals.
The walnut crystals dissolve slower and can
give a more mottled effect.
The amount of water used and whether it is
blotted controls how much the walnut
dissolves into the main hue.

The Pixie Powders, like Brusho, have some
pure hues and some with a combination of colours.
In addition to the dye crystals they have mica
added to give a gorgeous pearly sheen
when they dry.

For each comparison I tried to pick the
most similar colours that I have (as unbelievably
I don’t have the full range of each...yet).
I also tried to use similar amounts of
powder and medium.
They have all been tested on fairly cheap
watercolour paper.


Sprinkle the powder on the paper,
spritz with water and leave to dry naturally. 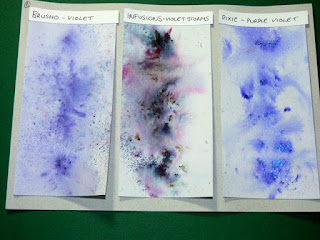 The Brusho seemed to spread the quickest
and the Infusions kept most of the granular appearance.
The mica in the Pixie Powder didn’t spread
as much as the dye crystals, leaving pearly dots.

Technique 2
Thoroughly wet the paper then sprinkle
on the powder. 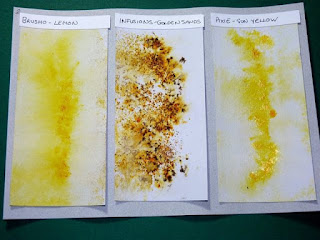 Mix the powder thoroughly with water to create a wash. 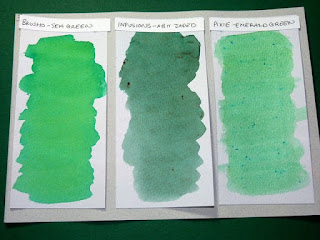 The Infusions have a much more muted grungy look.
The Pixie Powder didn’t dissolve as thoroughly
leaving a few flecks and the shimmer is more subtle.
You have to wait for it to dry for the mica to appear
on the surface.

Technique 4
Sprinkled on wet gesso then given a light spritz with water. 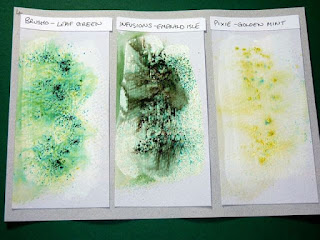 Interesting effects as the Pixie Powder dye
has nearly disappeared making the mica really stand out.
The walnut crystals in the Infusions seem to
dominate while the Brusho colours have separated out.

Technique 5
Added to a spray bottle and dissolved in water
to make a spray. 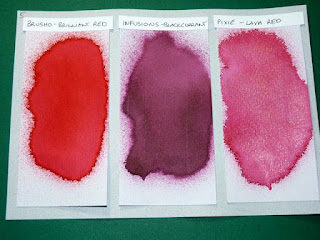 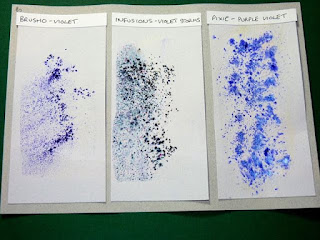 All three didn’t spread as much and remained quite granular. 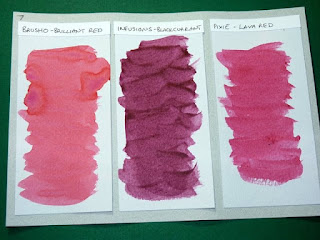 Technique 8
Darker wash with a lighter colour sprinkled on top. 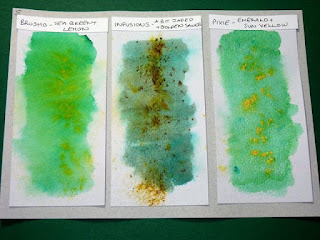 The walnut crystals and the mica stand out
better in the Infusions and the Pixie Powder,
where the Brusho blends together more. 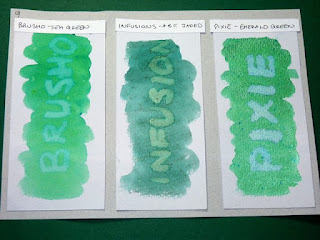 All very similar, the Pixie Powder kept its sheen even
where it was bleached.

I could have gone on to try stamping and testing
different surfaces such as glossy card and fabrics,
but that’s for another day! They all have their place.

For vibrant I would pick Brusho,
for vintage Infusions and
for shimmer the Pixie Powders. 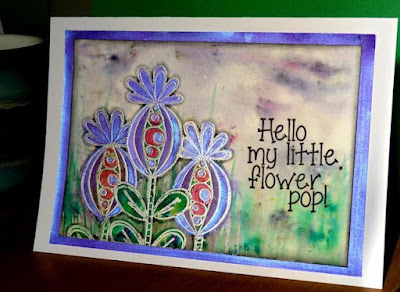 Super article Claire, thank you - I'm
surprised you haven't yet got ALL
the colours ...............!! Hehe
By the way, the card you have shown
at the end is really nice - I love how
you have used all the products there.