Here we are again, this is the last week of
looking back at some older projects, the DT
will be back with us again next week
with some new ideas for you!

This was such an amazing project
by Dawn that I thought it should definitely
be aired again!  It would be a lovely gift
too.
Dawn says -

"This week I've used an 8 x 8 canvas board to make an underwater scene. I knew the look I
wanted to achieve and remembered my Brusho
experiments. The Brusho Thickener along with
Brusho colours and
some cling film made this project as I envisioned it.
The Fish Stamps are fabulous
(my two are courting young love) and
can be used in different ways other than
doodling inside the shapes. I'll be using
them again soon as I really like them. So onto how
I made this project". 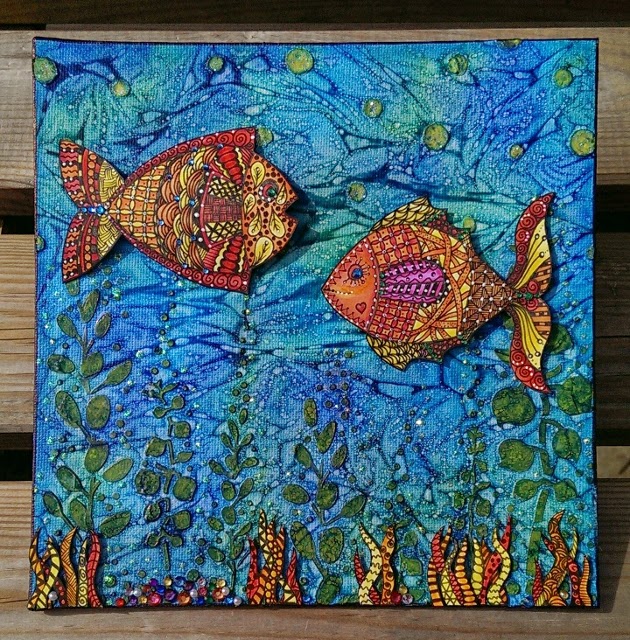 Apply Grunge Paste through the Bay Leaf stencil along the bottom and random circles above with Sequin
Waste Stencil. Leave to dry as it's quick. 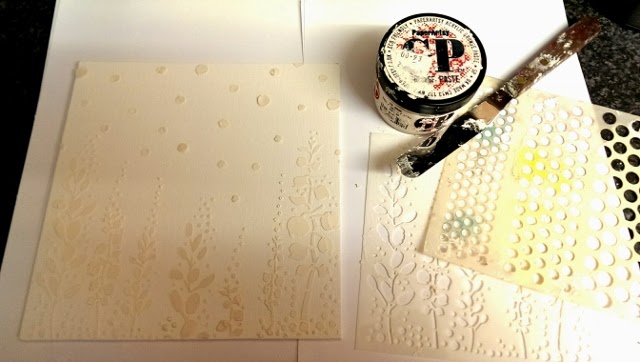 Position stencil back over same place as before and using
Guacamole Fresco paint and paint brush, I painted over the
Bay leaves Grunge Paste. Use a sponge and more
green Fresco Finish paints to build up the layers. Then I
painted on Decoart MixedMedia Satin finish 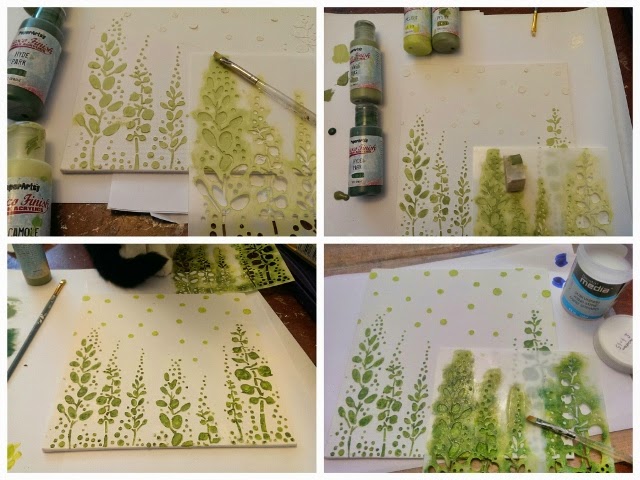 Next I coloured my background. First using blue
and white Brusho
and water, I painted all over and laid cling film
or plastic wrap over
the whole canvas, squished it around and left to dry.
I chose four blue colours of Brusho and mixed
each into a pool of Brusho Thickener.
With a large flat brush I dabbed on the colours covering
the entire canvas, laid over another piece of cling film,
pressed it around to blend colours and move
air pockets around. Then I left this to dry. 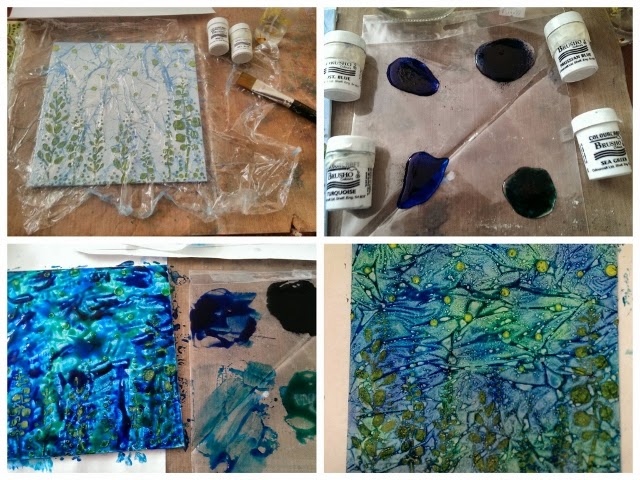 As I'd used a thick layer of Brusho Thickener this took 24
hours to dry.  I peeled off the cling film and it
was still damp, so I
used this to carefully wipe off the colours on parts of the
stencilling then left it to completely air dry. I dotted on some
Stickles Glitter Glue in Eucalyptus and Star Dust. 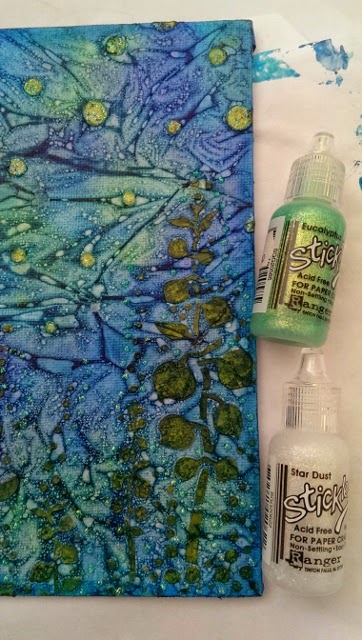 Whilst this was drying I stamped the two Fish and
doodled some
Zentangle patterns within the shapes. I coloured
with Pro Markers
and added some detail with white gel pen. I then
cut them out. 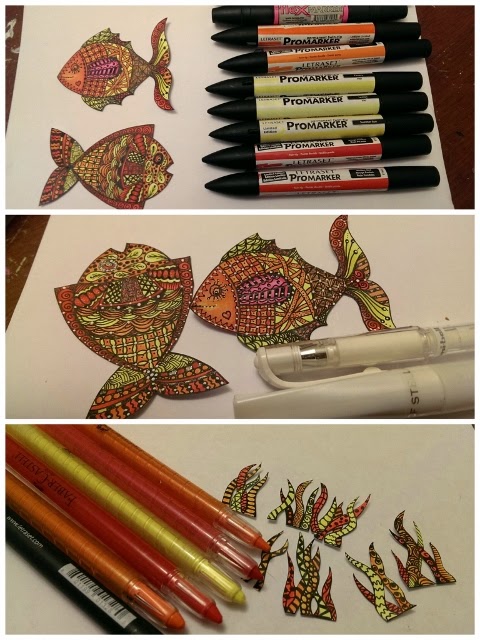 I drew some wavy sea plants, doodled and
coloured with Faber Castell crafters crayons. Gently
shape the
pieces by curving them in your hand. I added
some bling to the Fish
by colouring clear gems with Pro Markers and
gluing on the Fish.
I glued my pieces onto the canvas with glue gel. Add some
coloured gems as treasure at the bottom of the sea. 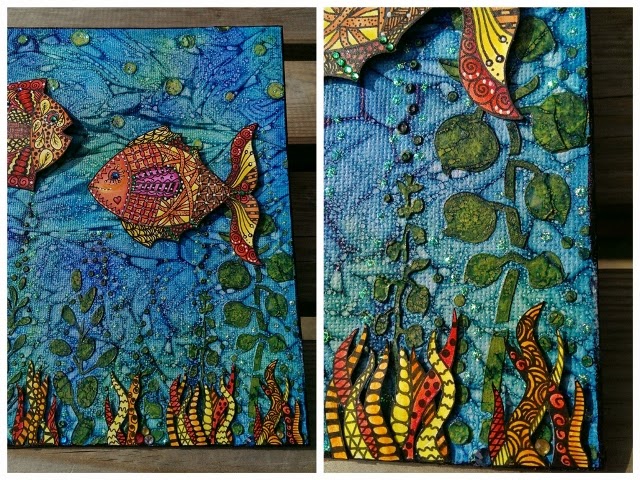 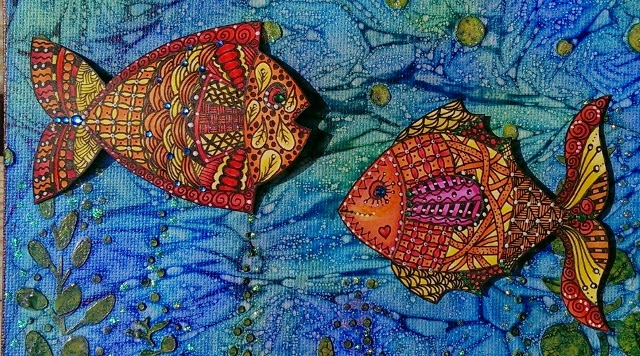 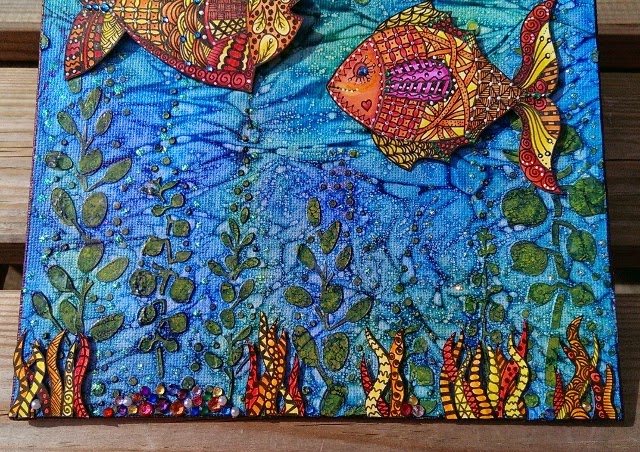 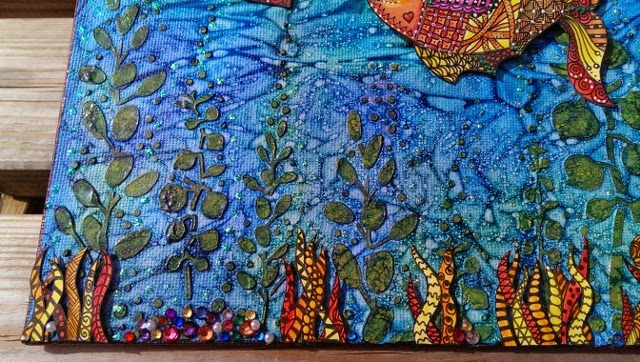 If you want to have a go, this is what Dawn used -


See you tomorrow with another project,